I didn’t necessarily mean to start my reading year on such a heavy note, but it seems like almost every book I picked up–both memoirs and fiction–centered around some pretty serious subject matter. Individually, I really liked most of these books. I would probably just throw some lighter reads in mix if I were to do it again. . . 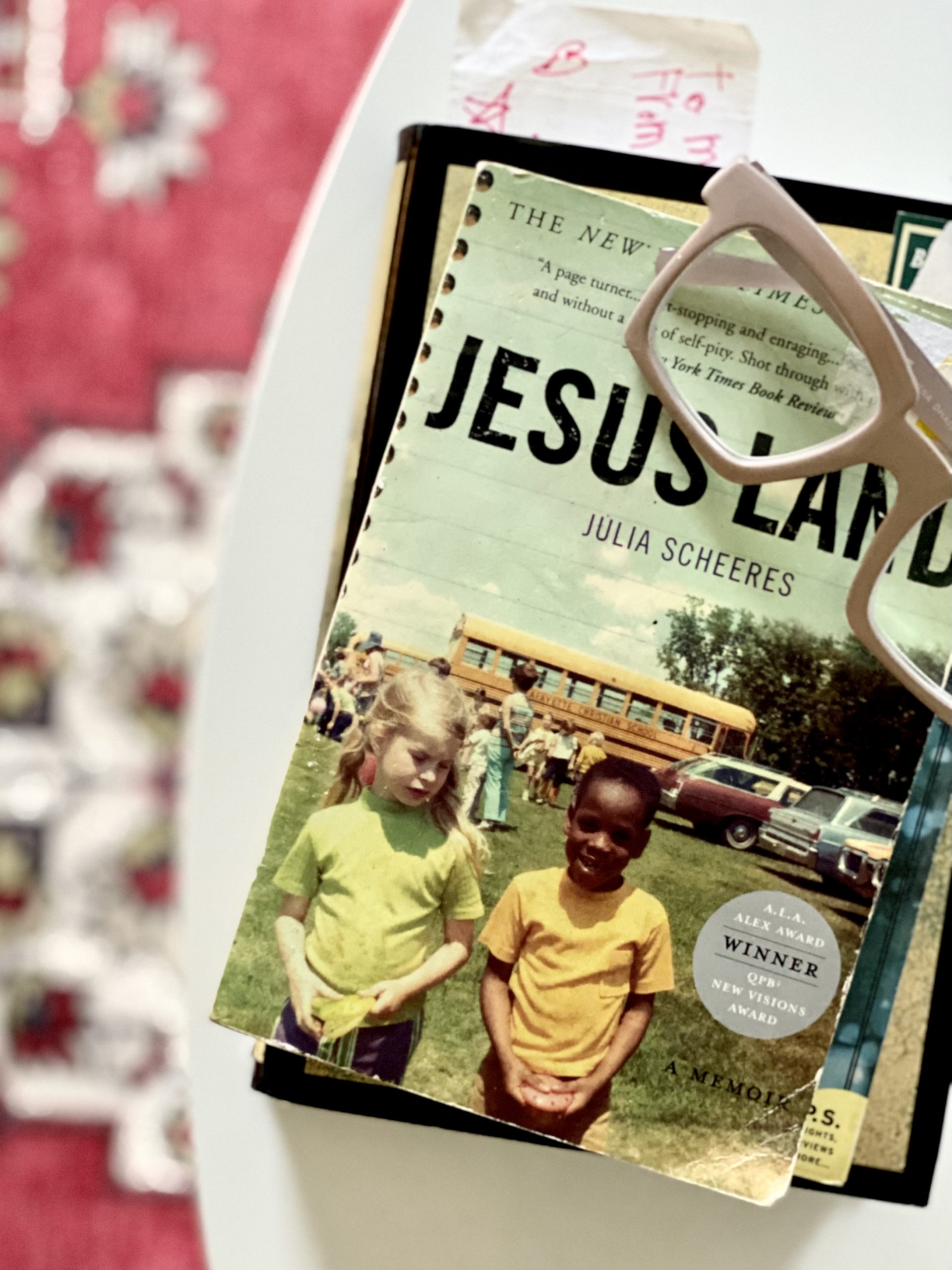 Jesus Land by Julia Scheeres  This book hit me hard. If I had time, I could’ve sit and cried for a little while after I finished. Julia’s (true) story is about growing up in a white “religious” family with adopted Black brothers and the abuse they experienced both within their family and outside of it when sent away to a reform school in the Dominican Republic. The fact that it’s a memoir–and that the same trauma she describes is most likely still happening to kids at the school today–is heartbreaking. Even more devastating is that these things were done to them in the name of “religion”. I would 100 percent recommend this book but be prepared. It’s a tough one.

This Tender Land by William Kent Krueger  After reading Krueger’s Ordinary Grace, I couldn’t wait to get started on this one. (In fact, lots of you told me it was your favorite book of last year.) It is beautifully written and a great story, but my lack of enthusiasm probably came down to timing for me.  It’s the story of a group of young kids on the run from an abusive boarding school situation and the hardships they endure and relationships they form with strangers along the way. I liked the way it was told from the perspective of one of the kids looking back as an old man, but overall, I just felt a little worn out by the time I got to the end. It’s still one I would recommend, but I’d probably buffer it with lighter books on each end.

A Woman is No Man by Etaf Rum  Another tough one that explores the traditional role of the woman in Arab culture and the challenges many face once in America. The story follows the struggle of a modern day teenage girl who is expected to marry young, while she tries to piece together her own vague memories of her mother and a mysterious tragedy that happened in the early 1990s. It’s often hard to understand a culture so different than your own and I found myself wanting to fight back for them through most of the book. The ending was one of those that made me go back through earlier chapters and look for clues I had missed. I definitely recommend–an important read that teaches empathy.

The Push by Ashley Audrain  I had heard this described as Gone Girl but about parenting. I kind of see the connection but I actually enjoyed this book way more. It’s dark and twisted and fast; I finished it in a couple of days. It’s a complicated mother/daughter relationship, to say the least. For anyone who has read this and East of Eden, I kept picturing Cathy when reading about the daughter. Does anybody “see” this, too?

Greenlights by Matthew McConaughey    I’m not necessarily the biggest MM fan but I’m almost always interested in reading someone’s life story and I had already heard enough about this book to catch my attention. Honestly, this wasn’t my favorite celebrity memoir. (A few I did really like: Demi Moore, Jessica Simpson, Elton John.) I found the parts about his early family life and how he kind got into acting fascinating. However, I got a little lost during his self-discovery phase later in the book. I ended up scanning most of the extra insights and stories that are included. Many of you mentioned on Instagram that the audio version was the way to go. It was available on Kindle from my library so I went with it,  and I think it was the best way to read through this one a little faster for me.

Next Year in Havana by Chanel Cleeton  If you happen to be looking for an education on the history of the Cuban government mixed into a multigenerational love story, this one is for you. I really liked it because there was enough substance to keep it from feeling like a a fluffy romance. In fact, it prompted me to do a little research of my own on Fidel Castro. . . There were a few elements that seemed far fetched to me, like the short time they knew each other before falling madly in love and making major life decisions, but on the other hand, I also watch and totally buy into The Bachelor so what do I know??

See more of my book recommendations in my Amazon store.