It’s been a while since I’ve written a book post, and I’ve read a lot since my last one. So, I’ll just share few picks that include several I liked/loved and a few I ended up quitting. But first. . . I finished a special one earlier this week. Are you all familiar with Karianne of Thistlewood Farms blog? I’ve read her blog for years and only briefly met her in person a few years ago, and as you would expect from her writing style, her personality is contagious. Her new book is as much fun as I thought it would be. 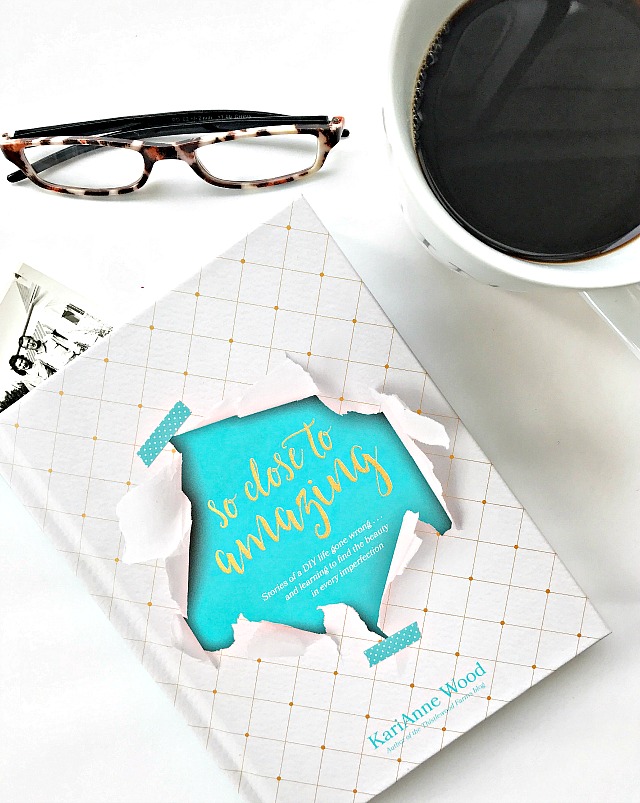 In her wonderful conversational style, she writes about living the try-hard life, her personal downfalls and the grace that brought her through. It’s funny and sweet and honest. She also talks about her family’s huge leap of faith that took them from their roots in Texas to a tiny Kentucky town that just happens to be about 30 minutes from where I grew up. #smallworld

This would be a great book to gift to a girlfriend or anyone who needs a little encouragement–and a good laugh. Sound like anyone–or everyone–you know? The release date is just days away (Sept. 5th) and you can pre-order here. 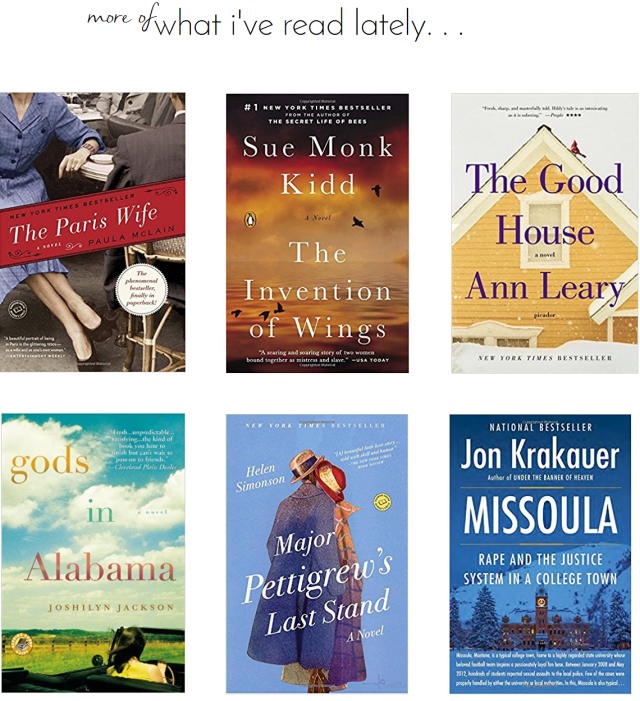 The Paris Wife by Paula McLain  I just loved this one. It’s written from the perspective of Ernest Hemingway’s first wife, Hadley Richardson, which in itself wouldn’t have made me want to read the book. But, this is a moving story of love and betrayal and heartbreak set in Paris in the 1920s. It drew me in, and I’ve downloaded this one (also based around Hemingway’s social circle) to read next on my Kindle.

The Invention of Wings by Sue Monk Kidd  This is going on my top 10 favorites list. It’s historical fiction set in Charleston in the 1830s and is based on female abolitionist Sarah Grimké and her complicated relationship/friendship with her slave girl Hetty. It’s told from each of their perspectives and I was cheering for them both. If you read just one from my list, I’d recommend this one.

The Good House by Ann Leary  I don’t read tons of modern day books but I do like Ann Leary’s style–entertaining without being too light. (I also read The Children.) This one focuses on a middle-aged realtor who is coming to grips with her drinking and unwillingly finds herself finds herself as the go-between in a small-town affair between an old family friend and a new real estate client. Despite the subject matter, it’s still humorous and a fairly quick read.

gods in Alabama by Joshilyn Jackson  I found this book at a thrift store at the beach and it was the perfect Summer read. There are a lot of twists in this book that deals with a murder, racial prejudice and family tensions in the Deep South–but all in the funniest of ways. I know, I know. But, I promise it’s a good one.

Major Pettigrew’s Last Stand by Helen Simonson  So many of you recommended this book to me and while I liked it, I wouldn’t say I loved it. It’s endearing–the story of a widower and a widow and their new friendship that eventually turns into a somewhat complicated romance. I did really like the main character but felt like the book was a little slow overall. . .

Missoula by Jon Krakauer  I also read this while we were at the beach this Summer and while I would highly recommend, it’s definitely NOT a “beach read.” This is one of those (non-fiction) books that’s terribly (emotionally) hard to read but feels necessary. It’s about the rape crisis in a small (football-obsessed) college town and how the criminal justice system there has dealt with (and often failed) the victims. The books takes you through several specific incidents and there are really terrible details to absorb. But still, I’m not sure I wouldn’t want my girls–and boys–to read this before they head off to college. (I’m glad I have a few years to think about it.) It was definitely eye-opening.

Okay, and I promised some books I’ve abandoned. I’m only sharing these because I would love to hear what you think if you’ve read them, too. . .

Lincoln in the Bardo by George Saunders  I was so excited to get this book in my hands after hearing about it on a podcast and reading a raving review online. The librarian even went on and on about it when I checked it out. You all–I have never felt so blah about a book since required Summer reading in high school. I don’t get it. Are people saying they love this book because they think it makes them seem smarter? There was nothing–and I mean nothing–enjoyable about it for me. I quit 100 pages in when I realized I’m a 40-year-old woman and there is no longer any “required reading” for me.

Exit West by Mohsin Hamid   I admit the main reason I didn’t finish this book is because it was due back at the library, and I just couldn’t get into it. I actually really liked the storyline but the characters felt far away to me. If a book feels like work, I’m trying to do better about just quitting and moving on to the next.

What have you read lately?