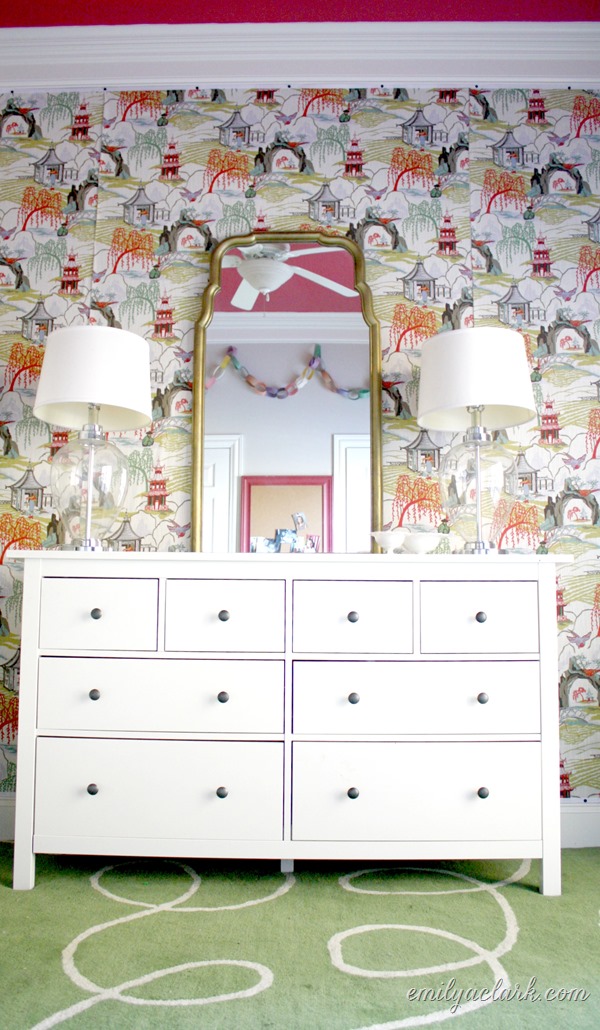 As I mentioned earlier in the week, the girls’ bedroom “take 2” started with a new fabric. I love Robert Allen’s neo toile as much as I did when I first saw it. So, I took that as a good sign that I wouldn’t get tired of it, even if I covered an entire wall with it. I will say that this project was much easier than I expected. It’s not perfect, if you’re looking closely, but the busy pattern is very forgiving. (And, you shouldn’t be looking that closely at anybody’s walls in the first place.)

I should also add that you might want the help of a good friend. This is a project where you definitely need an extra set of hands. Also, most of the tutorials I found online made me think that you could just slap the fabric up after rolling the wall with liquid starch. I found that thumb tacks were pretty important for initially holding your fabric in place while you roll. Also, I wouldn’t have been able to do this without relying on a grosgrain ribbon trim to cover my mistakes around the edges of the wall at the very end.

The starch was amazingly adhesive. I probably used about half a bottle for the one wall. I used the craft knife to cut across the bottom of the fabric and to cut around the outlets. 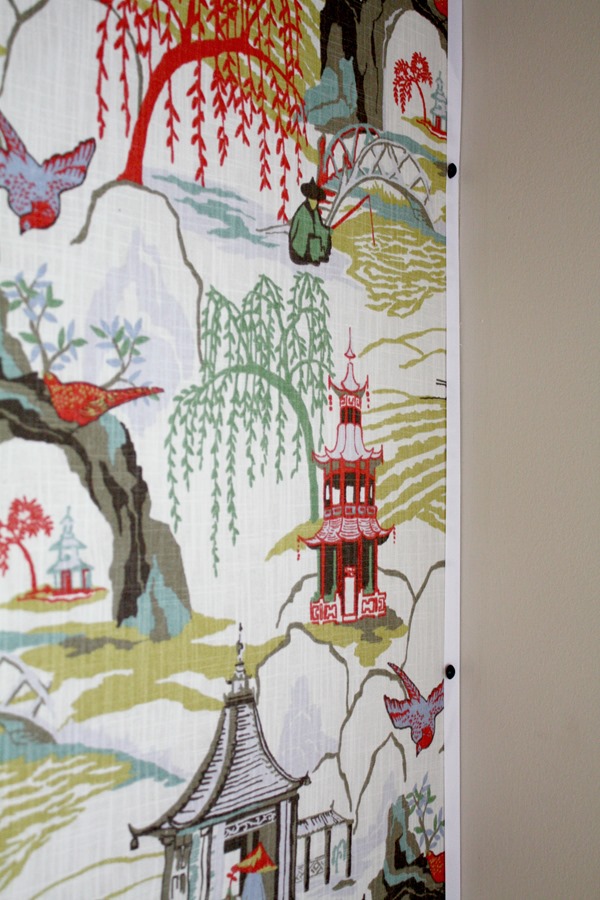 Like I said, the grosgrain ribbon was my saving grace for “cleaning up” my edges. We used black furniture tacks (around $2/pack at the hardware store) to hold it up and finish the look. (I spaced them about 14” apart, just for reference.) 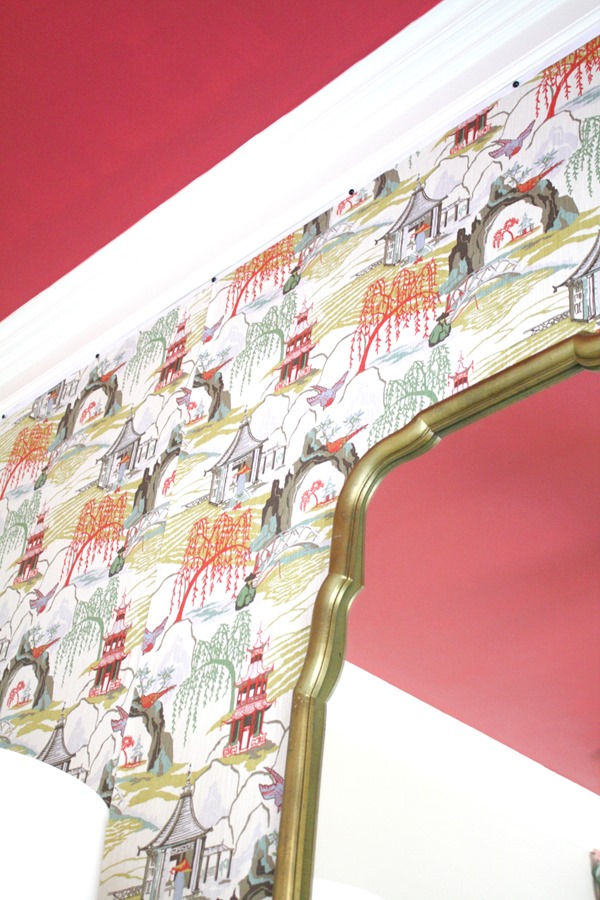 And, here’s where the staple gun came in handy. When it was all finished, some of the seams (which we folded to make more clean) weren’t laying as flat as I wanted. So, I just stapled them down into the wall. Probably not ideal, but I felt better about it staying down that way. And, I dare you to find the staple in this pattern. :) 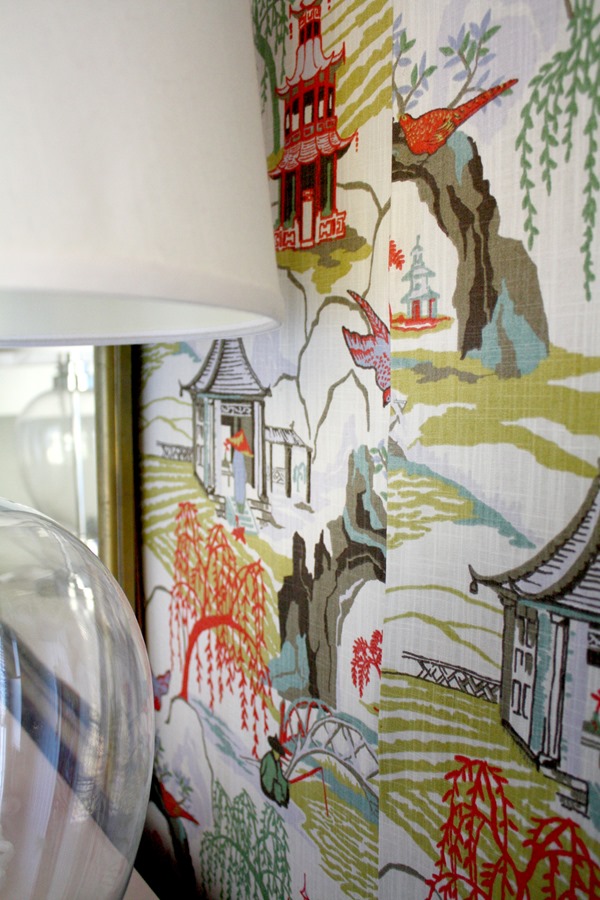 By the way, I’m sure (some of) you will notice that the pattern doesn’t match up at the seams. For me, it’s not an issue. I was just going for the overall look—and again, there’s so much going on that I hardly notice when looking at the wall as a whole. But, if this kind of thing bothers you, this could be a much more complicated project. 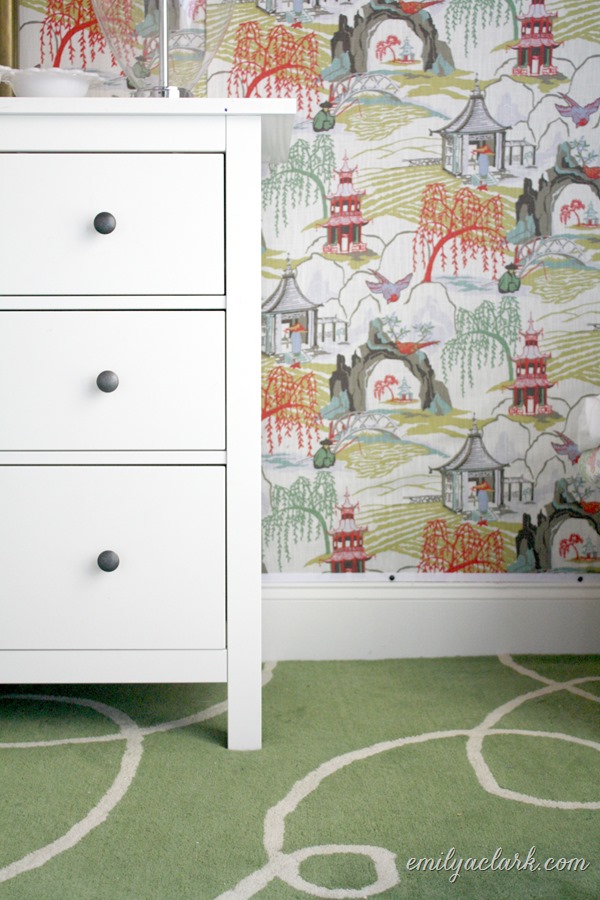 Overall, I would give this project two thumbs up for impact and ease. (I hear it’s also super easy to take it down.) In case you’re curious, I used nine yards of fabric total and 15 yards of ribbon. Total cost for fabric and supplies = around $170.