Designing for the sexes is tough.  Especially when they’re of the younger variety and one strongly prefers pink while the other is set on blue.  Since our upstairs bathroom will be shared by two girls and a boy (and the occasional guest), I wanted to create a happy, gender neutral space. 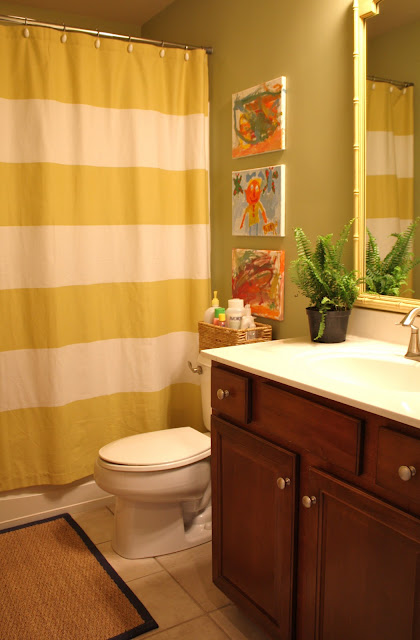 This bathroom is one of the busiest places in our house in the mornings and at bedtime, but I hadn’t touched it since we moved in. 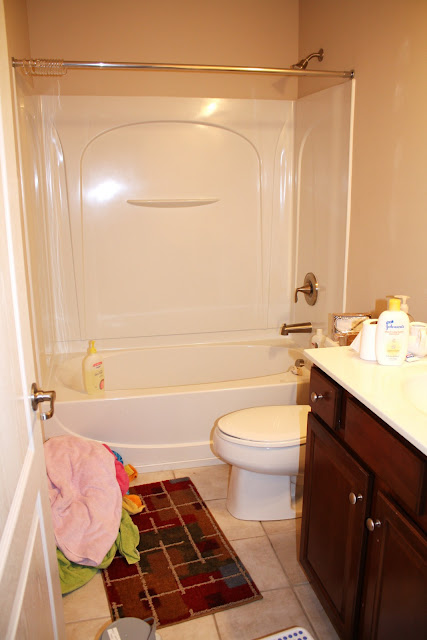 To say it was in disarray would be an understatement.  We were keeping their toothbrushes in a shoebox, for goodness sake.  (Did I just admit that?)  Truth is, my goal was to get the kids in and out of this tiny space as fast as possible for baths, to fix hair, brush teeth, etc.  Decorating it always took a backseat to other projects I wanted/needed to do. 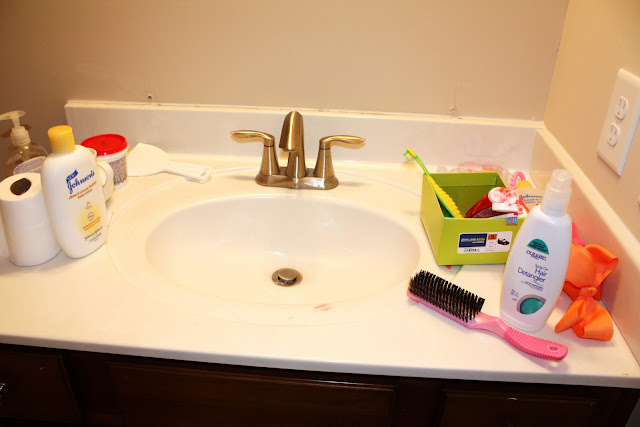 So, how did this makeover begin?  I thought it would be fun to walk you through the process. . .
First stop–our garage.  I found a gallon of free paint that Dutch Boy had sent to me a while back to test out.  I had randomly chosen this color without a plan for where it was going.  The color is “MacKinac Island”, and I thought it would be a good compromise for a shared space. 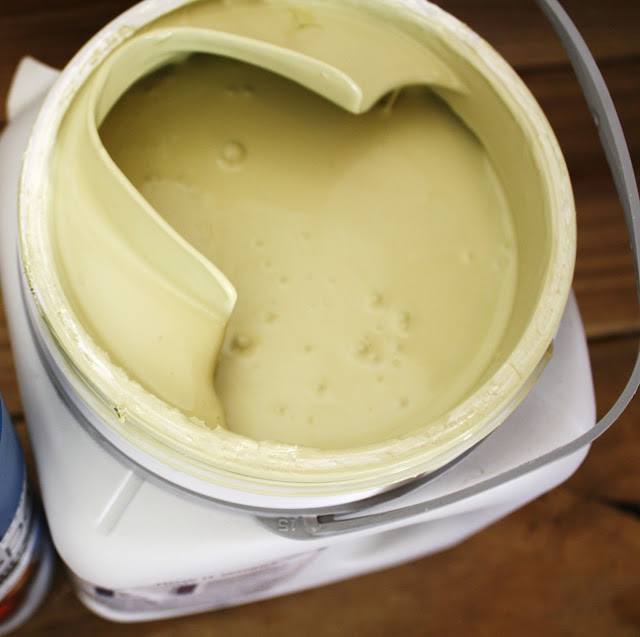 I also had a faux bamboo mirror that came with another Craigslist purchase.  It had been leaning up against our bedroom wall for months, waiting for the right spot.  I liked the yellow with the green walls and decided not to spray paint it.  Voila!  I had my color scheme.  (As you can tell, my design choices in our own house aren’t always the result of a detailed, thought-out plan.) 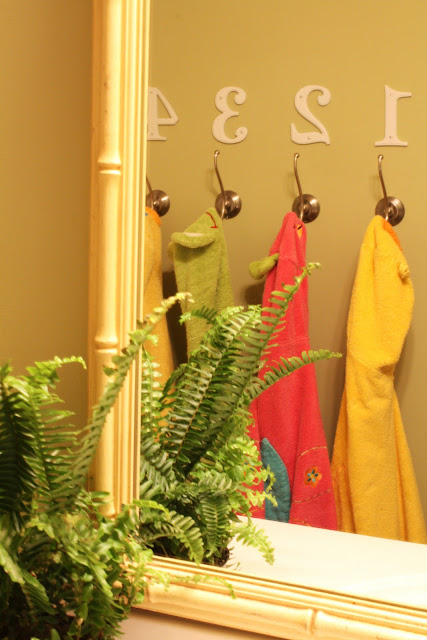 I added the striped shower curtain from West Elm to keep it modern and fresh.  (I have a hard time resisting horizontal stripes. . . )  While I didn’t want a theme-y bathroom, I did want it to feel like it belonged to the kids.  Having them make their own artwork (in colors I chose) was the easiest–and cheapest–solution. 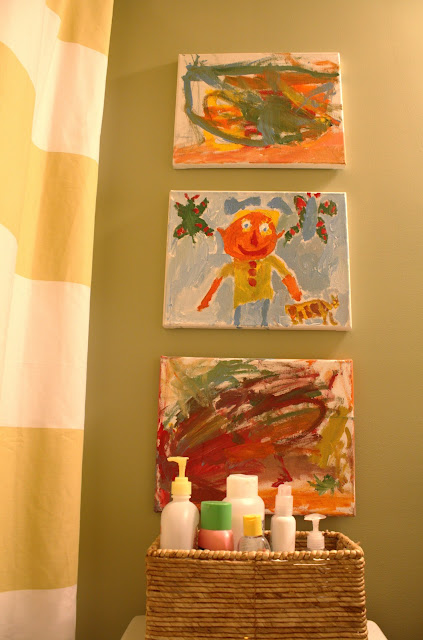 To solve the never ending towels-on-the-floor dilemma, I bought these big hooks from IKEA.   For fun, I bought house numbers from Lowe’s and spray painted them to hang above the hooks. 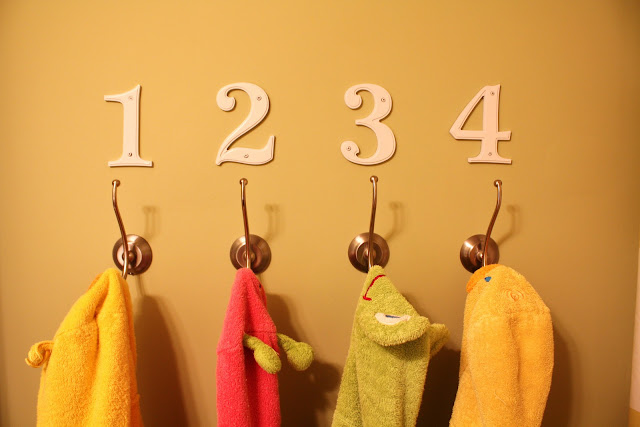 (Side note to my parents: There are four numbers on the wall because IKEA sold these hooks in packs of two. I promise this isn’t my cute way of making a big announcement.) I added a seagrass rug (very durable for lots of wet little feet) and a woven basket for texture.  Although we have storage under the cabinet, I find it so much easier to have what you use sitting out within arm’s reach. 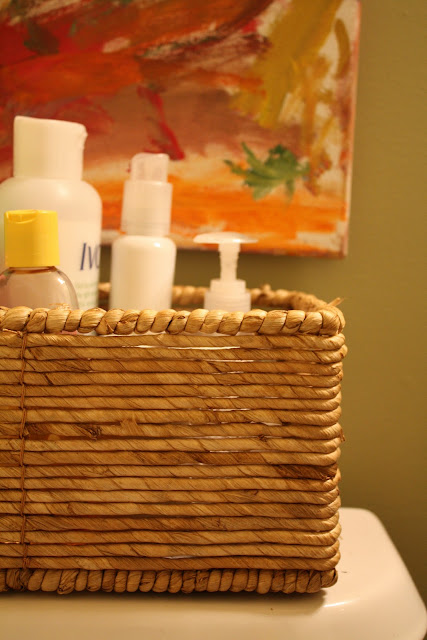 Although we’re still rushing in and out of this space, it’s no longer an eyesore.  And, by using some things I already had and not making any major cosmetic changes (i.e., lighting, flooring, etc.), I was able to complete the project for around  $150. 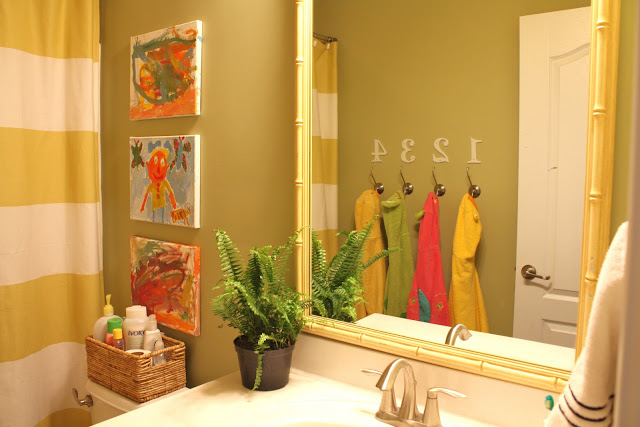